Over the summer and semester 1 of 2019 I have been using MSNoise to monitor the Auckland volcanic field along with several  small associated investigations that followed. This page aims to provide a summary of methods, results, possible lines of enquiry for future work as well as questions that are still unanswered after this time.

For my research over summer, a summary can be found here,    along with my final report here.

Over this time I created a guide for myself called MSNoise-how-to.  It is very informal but is a good place to start for anyone new to MSNoise, filling in some of the spaces left in the documentation and other useful tips I discovered relating to using linux for the first time. A link to this document can be found here.

A link to the final output on the PAL website  can be found here. A bash script was created to download seismic data, process it using MSNoise to create the dv/v plot and then remove the data once completed. This script was added to the cron file by Guy, and with some SQL help from Josiah, this runs every day to build up a picture of temporal variations of surface seismic waves in the AVF.

I adjusted the python script from the  MSNoise defauly, to add error bars and to make the y-axis of each of the moving-windows the same in an attempt to avoid misleading people who might interpret the result to be a warning sign of a big eruption event . My adjusted version of the code can be found here.

There are still some issues with this tool. The dv/v output has an option to plot the line of best fit’s gradient forced through the origin or not. Ideally the gradient should go through the origin as we would expect a lag time of zero to be associated with zero change from the reference. The key issue here is that that the two plots (M0 (origin forced gradient) vs M (best fit gradient)) are quite different. In an ideal world these should be the same, which indicates issues with the line fitting, possibly that the line is being fitted around points in the wrong region, or our green’s functions for the station pairs are non-sense. By setting the window encompassing the points  being fitted to “dynamic”,  MSNoise chooses an appropriate window based on station separation, avoiding human errors and adjusting it according to each pair.  I suspect that not all station pairs are created equal, with the interstation path being being equidistance from our ambient seismic noise source (the two harbours and coasts of Auckland) and when these stations are averaged to plot the dv/v for the AVF they reduce the quality of the data.

An avenue of investigation would be to determine which station pairs have reliable dt/t plots, giving believable gradients, which are similar to M0, then only using these stations when plotting the data. Another option would be to determine an exemplary station pair, one which has clear greens functions plots, providing accurate dt/t and then dv/v measurements that we can then assume apply to the AVF. Above is an example of the dt/t plot for a random station pair’s 30 day average (Awhitu to  Waiheke Island).  The lines of best fit has a very small gradient which is what we want, considering the AVF has not had any reasons to expect elevated dt/t levels. The blue section is the window containing the points that the linear regression is best fitted to.  As you can see the delay time gets greater as the lag time increases, so window selection is important to ensure the line of best fit is being created using appropriate points. Just by eye-balling this plot, perhaps the window would be better if moved closer to time=0 to encompass the linear section from time=20 to 50. In this instance perhaps the dynamic window fit is not the best. As this data is a 30 day average, we would expect more uniform points. This large variability in points could also indicate this station pair is not good for making inferences about dv/v in the AVF.

Another avenue of investigation would be to determine what window size and position gives the best line of best fit for a given station pair. Ideally this would have similar results for both M and M0, with a relatively small errors.

This investigation looked to determine if there was a correlation between groundwater levels and temporal seismic velocity in the Auckland region.

Below is an example of the dv/v plot for all the stations, in the AVF from January 2017 to December 2018. The outputs are highly variable depending on window length, station pairs used, ground water levels sites used and whether M or M0 is used to determine dt/t. Another option depends on the frequency the initial data is filtered at. Below is an example of two different filters in the influence they have on the Green’s function plotted against inter station distance. This difference in green’s function based on different filters will also change the resulting dv/v and then the relationship between the dv/v plot with ground water level data. From the plots below, velocity is best represented by filter 2. I wrote a script to visually show the correlation between the chosen groundwater level and chosen dv/v data. It can be found here. Below is an example of the output I get from correlating the 20 day average for the NZ_EPAZ_NZ_HBAZ station pair , based on the line of best fit that wasn’t forced through the origin against the average ground water (averaged over 8 ground water level station across the Auckland region). This plot above is as expected, where there is a positive correlation between change in seismic velocity and the inverted groundwater level. This is because the signals we interpret are predominantly shear waves, whose speed is described by,

V=√(G/ρ);  G is shear modulus and ρ is the density of the material.

Rainfall and groundwater increases the density of the earth, so the waves travel slower.  There is also a peak at approximately –360 days which shows this is an annual trend, corresponding to the rainier winter months.

Future investigations would look into changing the parameters that influence the dv/v plot in order to maximise the relationship with ground water levels. Ideally the max correlation will be at zero days lag. This would involve getting the best possible representation of dv/v by selecting station pairs that do show groundwater level correlations (ie ones that are not separated by water) etc. Also I would further investigate which specific ground water sites reflect the seasonal variation and use these to create a better, more accurate representation of seasonal groundwater.

The result of this experiment varied wildly depending on the station pair, filter, window length and choice of gradient in dt/t plts (M vs M0), so there is a lot of work that could be done to determine which parameters offer the most accurate method of obtaining a dv/v plot that reflect changes in ground water level. Also we could prove this method by showing there is no correlation between groundwater level and dv/v plots with paths that pass primarily through the ocean. 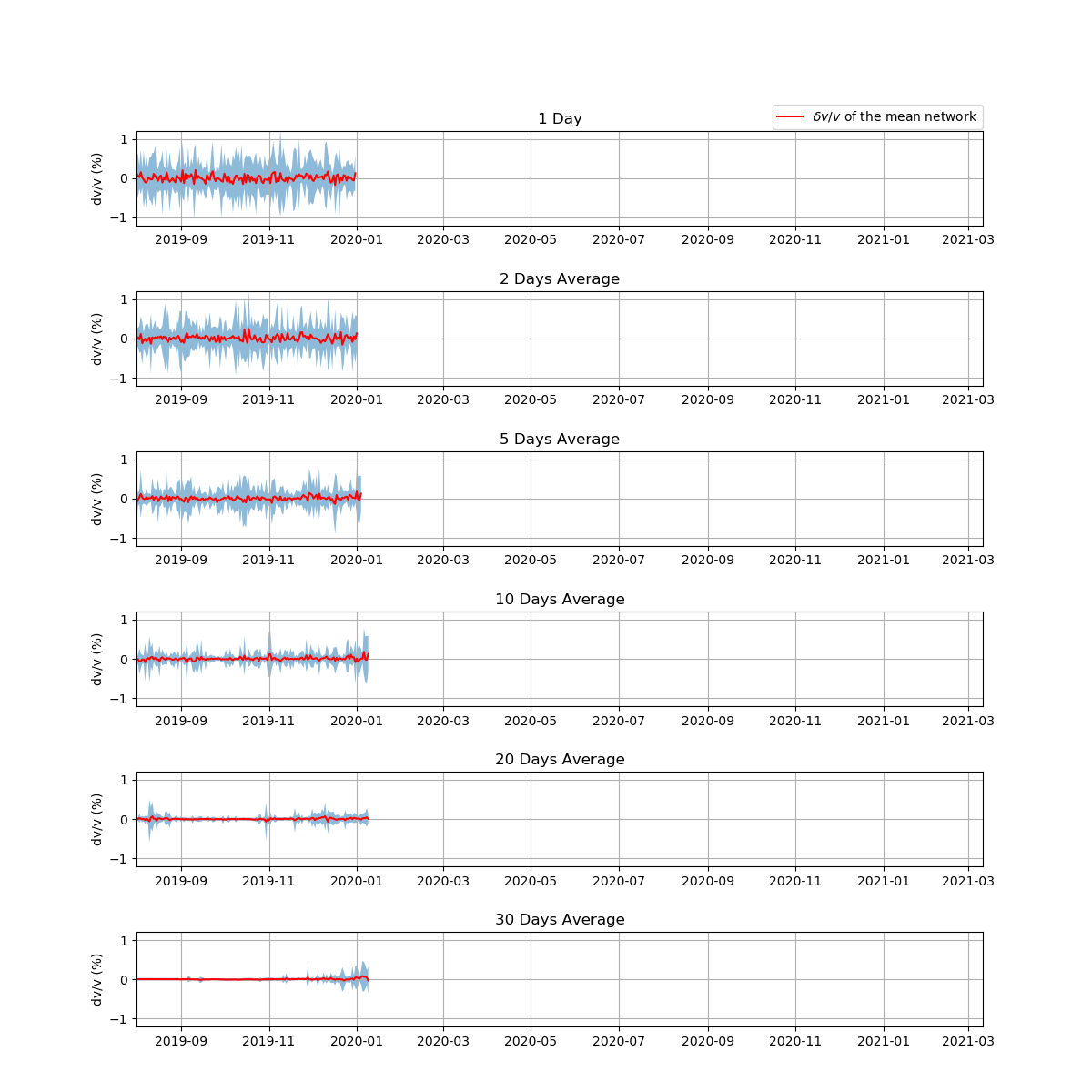 Above is a plot of the temporal seismic velocity in the AVF as found by using ambient seismic noise through the MSNoise package. At the moment this tool is 9 days behind the current date. The seismic data is downloaded from the Geonet FDSN archive service, which runs 7 days behind the present time to ensure the data is as complete as possible. To ensure we then get this complete data we only download the eighth day before the present.  The plots can be viewed the next day, so after being uploaded they will always be 9 days behind. This process is repeated every day to build-up a complete image.

Gaps may be observed in the 1-day moving average. This is due to the data for a given day not being available for download 8 days after the date in question. If it is not available, it will manually be updated later. These gaps increase the variability of the plots, as what was a 5-day moving window is now only a 4-day moving window if there is no data for one of the five days.

A moving window is an average of the dv/v for each days of a given window length, ie a 30-moving window for the 30st of January will show the dv/v average for the 30 days from the 1st to the 30th. A larger window length means the dv/v values are averaged over a greater number of values, so will have a smoother curve over time.

What can be determined from these plots?

Based on a study done in White Island, rapid changes in dv/v were observed preceding eruptions. An incoming eruption compresses the ground above, changing the density of the earth, which can be reflected as changes in the dv/v plot. Currently this plot is unlikely to predict an eruption in time due to its 9 days latency along with a sizeable window length needed to observe any real change. However, it could be furthered to help current methods confirm an imminent eruption by reducing the latency.   As Auckland has not experienced an eruption for a long time (~600 years), we don’t know for sure how an incoming eruption would impact the dv/v plots in the AVF.

An imminent eruption is not the only reason for variability in these plots. Changes to the material properties of the earth may be reflected in dv/v plots. In a study of Mt Merapi in Indonesia, seasonal changes to dv/v w coincided with changing groundwater levels.  Another possible reason for changes in dv/v is variation to the source of energy for these experiments, the ocean. Storms out a sea alter the source and strength of the ambient seismic noise traveling through the earth, creating variations from normal.